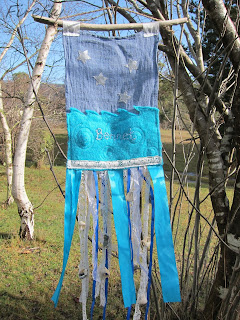 August 19th is the Day of Hope.

A day meant to remember children who have died.

I remember every day. Not just Ben, but so many other babies.

But the purpose of my participation in this wasn't just to remember, but to do.

There is a lot of healing in doing.

Making the flag, for me, wasn't about a finished product. It was about the journey in making it. It was about collecting the materials that reminded me of Ben, developing an idea, a reason, a picture, of something that was just... BEN.

I found a second hand baby swaddle. White. Almost brand new. Nothing special about it. Just a plain white muslin swaddling blanket, like the kind I used when Simon was born.

So I bought it. And I cried. Because I never got a chance to swaddle my little Bennet. 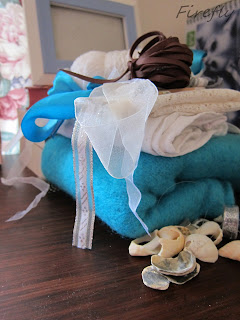 Other things I found either second hand or had at home already (being a collector of so many odds and ends). I didn't want to buy anything new for this. For me it was in the looking. The finding. The scrounging through meaninglessness and silly things and finding... him. Being able to see Bennet everywhere.

I ended up with a nice little pile of things.

That lovely white swaddle. Some fluffy white yarn. An old felted scarf that was a beautiful shade of tropical ocean blue and just kind of fun to touch. Odd bits of lace and ribbon. Shells. Driftwood. Glitter. Coloured paper.

And slowly an idea formed.

When Bennet was dying, and Phillip and I were stuck at the hospital in Hobart waiting for more and more tests, we were encouraged to get out of the hospital and walk around. We ended up spending most of our time on the waterfront, staring at the ocean, breathing in salt air. Wondering what was going to happen.

When we learned, a week later, two days after we go home, that his heart had finally stopped beating, we again ended up at the ocean. This time wandering a sandy beach picking up shells and one lonely piece of brown sea glass. Planning his funeral. 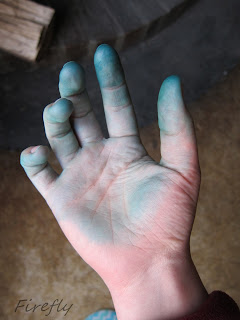 The ocean is a calming place. And ten months later, it still reminds me of him.

So I tied these things in to my little flag. The ocean, some shells, some paper stars. His name. All whimsical, childlike, and ocean-y.Something that completely reminded me of Bennet. Something that makes me feel like he's still part of me. Still part of my life. He's gone from me, but not forever.

The finished flag is beautiful. I held it and wept, and imagined what it would be like to have him here, nearly 10 months old, playing with the pretty dancing ribbon. 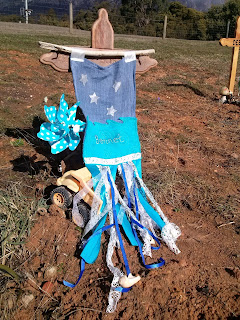 I placed it on his grave and sobbed. In the process of making, doing, searching, and most of all, remembering, I found help with healing, help with connecting to my grief and to my son. Taking that white swaddle and cutting it up and dying it (food coloring works better on skin than it does fabric. I just used watered down acrylics eventually to get the color I wanted). Stitching his name. Sewing paper stars. Weaving twine together. Sewing bits of ribbon, lace, and shells together. Using my hands. Making something for him. In memory of him.