The one that got away

Phillip had most of last week off work. It's been slow the past few months, moving people, since the economy isn't fantastic and now, we're at the end of the tax year.

But for the most part, we enjoy his days off and use them to our advantage; either staying at home getting things done with each other, "shopping", or visiting people. The weather was so wonderful this last week though, that we talked ourselves into some fishing.

See, you can buy a fishing licence here for freshwater fishing and fish for a whole year (August to August) with that licence. Or you can go sea fishing for free. I'm not clear on the benefits of one over the other other than price and that you really can't catch trout as they only live in fresh water (and Tasmanian trout are apparently quite wonderful).

But I digress. We went fishing at Port Sorell. The Jetty, to be precise. (Last time we went, we were at Squeaking Point at Port Sorell).

So when we got there, there was a kid standing around, looking to be between 12 and 14. And it's a school day, mind you, so my husband tried to make conversation with him (we found out he only goes to school Tuesdays and Thursdays, and was asking for a light for his cigarette), before he wandered off. We began fishing and caught a few very small flat heads (which, I found out the hard way, are 90% spines. Even when you grab them flat on the head, they're just full of spines) and the kid showed up again, this time with a rod and reel, and a small lure he began to randomly cast into the water, wandering all about the pontoon.

Then, as I reeled in to check my bait (we'd been getting lots of small nibbles and loosing our bait this way) I get a NICE bite, and reel in a decent sized Cocky Salmon! Phillip scoops the fighting thing into his net and the kid appears out of nowhere to reach into the net saying "I'll get it for you!" and GRABS my fish! TAKES the hook out, and runs to our bucket HOLDING MY FISH to get water into the bucket and put my fish in.

He then starts poking at the fish, absolutely obsessed with it, and saying he wished he had something to catch fish with because his lure just won't work. So Phillip offers him a hook, sinker, and some of the chicken we've been using because, really, we've got plenty. This amuses the child for a good half hour or so, until his sinker slips because he tied it on wrong. So he gave up and, instead, started picking and biting at his finger. To bleed himself. "To attract the sharks" he said.

And he was OBSESSED with my fish. He even grabbed it out of the bucket again to get it fresh water. And sat over the bucket watching it and playing with it. Which... you just don't do. You just don't mess with someone elses fishing things or fish unless they give you explicit permission. And here in Australia, they seem to really have a thing about "this is MINE" and you just don't touch other people's things. For example, in the States, it might be a compliment, something desirable, to have a stranger come up to you and ask to pet your dog while you're taking it for a walk. Here, you just don't. Don't do it. That's someone elses dog. Do not touch. So, if it's someone elses fish, and possibly expensive fishing equipment, you REALLY don't touch.

So I convinced Phillip to just bleed it already so we could pack it up. Because by this time, I was afraid he would throw my fish back in. So he does, and the kid wants the head to fish with, to try and catch a skate. And at this point, we just want the kid to leave. It's one thing to hang around, talk, fish with each other, but he's getting far too hands-on with our things and we're not quite sure how to nicely tell him he needs to back off. But we give him the head and toss the bloody water from my fish into the water.

10 minutes later, I'm reeling in again to check my bait and something SLAMS into my hook. I start reeling whatever it is in quickly, letting it run JUST a little, so I don't snap my line and I can tire it out a bit. Phillip grabs the net and runs to the side, looks in, reaches, and the kid steps in front of him. They're both yelling that it's a barracuda. Barracuda! Over a foot long! As Phillip reaches to get it in the net, and I continue to reel it in, the child GRABS MY LINE AND PULLS. If you don't know, this releases all the tension that is keeping the fish on the hook. I stop reeling because I'm afraid I'll cut this kids hands with the line with all the tension on it, and he lets go, stands in front of Phillip again (Phillip was trying to figure out how to scoop up the fish without knocking the kid into the water), and grabs the line AGAIN.

We went back to the same spot the next day, but ended up not staying because four people there had eight rods. Jerks. There was no room on there and I've never gotten such icy glares from old guys before as when we walked up to check things out. And the kid came back, too. He told us he couldn't fish there either because one of the guys had pushed him in before.

But, we got to eat at least one fish. And that's cool, right?

Posted by Firefly at 6:08 AM No comments:

We celebrated our one-year anniversary.

Which, while being totally awesome (I mean, it's the FIRST anniversary of being married for one whole year, meaning we're officially no longer newlyweds), is just a little bitter-sweet to me. Mostly because it has now been (over) a year since I've seen any of my friends or family.

But more with the good memories of one year of marriage.

Phillip showed up, home from work, dressed in his full wedding suite. Tie, shoes, everything. With a massive bouquet of pink and white lilies, daises, and three roses (one for each of us, and one for our first year anniversary, he said). 3 days later, the rest of the lilies are still blooming and smell absolutely wonderful. 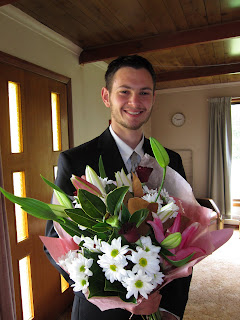 I made our rack of lamb (from that lamb we bought) so rare I think my mother-in-law would cry. It was DELICIOUS though. Best lamb I have EVER had. We ate it with plenty of roasted pumpkin and garlic-basil mashed potatoes. Phillip said that, with food this good, how are we ever going to find a restaurant better to eat out at? (since we very rarely eat out). I'm not trying to brag, really, but it was the best meal I have ever made. Or the lamb was, at least. Oh, and the lemon brownies we had for dessert. Which I found via pintrest. And have had tremendous success with. 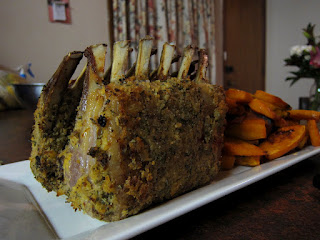 So what have we learned in one year of marriage? 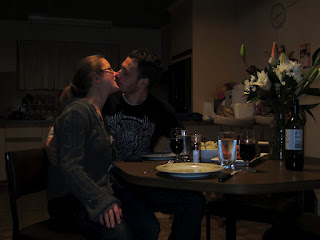 And... that's about it for now. Otherwise I (or we, Phillip has been sharing and laughing over this list with me as I write it) will start to sound superfluous.

While it hasn't been a terribly hard year of marriage, it's had it's downs. But overall, I'm really looking forward to many more just like it or (hopefully) better.

And, I'm curious, have any of my few readers any advice for the years to come, or things they themselves have learned? Share in the comments if you'd like, we'd love to read them.
Posted by Firefly at 5:31 AM 2 comments:

Fourth... no, Fifth of July

We had a somewhat belated Independence Day celebration here.

I'm not overly patriotic (though a good rendition of "The Star Spangled Banner" will bring tears to my eyes, and no, I'm not going to give up my American citizenship unless someone forces my hand), but I like celebrating. Even a tiny little bit.

But, since the Fourth of July is not a world-wide holiday (though some Americans might be surprised by that), there were no fireworks, special town celebrations, or BBQs to go to. Instead, Phillip and I spent the day (he DID have the day off work, but more because no one was moving) at his parents house splitting more wood to help replace what we take to heat our house, and help clean up all the wood that, well, needs to be split.

We ended up eating a Fourth feast on the FIFTH of July (though that would have been the Fourth back in America anyway... so if you ignore the whole time-traveling thing, it still counted. And anyway, most towns don't seem to actually set off fireworks or do anything celebratory until the weekend before or the weekend after the Fourth if it falls in the middle of the week).

So we found a new brand of hot dogs to try. They come in a can, and we were somewhat hesitant to try them, but figured they couldn't be that much worse than the ones we'd already eaten. But, I decided to make burgers on top of that, as well as a mountain of baked regular and sweet potato fries, in case the hot dogs were more than we could handle eating.

While my hot dog buns didn't really turn out well for hot dogs, they tasted FANTASTIC (to be fair, the recipe called for potato flakes, which I had none of, so I just used more flour. And I probably used to much butte). Really, all that was wrong with them was they weren't flexible enough to open and hold a hot dog. I didn't care, I'll make them again just to eat with jam they're so yummy. The hot dogs though. Oh my. They're the best we've had so far, I think. Still not a great dog, but really good. Definitely a repeat.

We ate ourselves into oblivion. Fresh baked fries (though I'm now in the habit of calling them chips... assimilation), spicy Tabasco mayo for the sweet potato ones, fresh baked rolls for the dogs and burgers, and watching Psych with the hubby. It was a good night.

Posted by Firefly at 7:12 PM No comments: