Being from the suburbs, I never really had all that much interaction with livestock. Enough so that I'm not completely stupid when it comes to them, but really, not much more than the rare horseback ride and hearing friends or friends of friends talk about their cows/horses/sheep, etc.
Tasmania, though, is very rural. The nearest city I'm by is about thirty minutes away and not all that big a city by American standards.
My in-laws have chickens and ducks for eggs and amusement, as well as two horses. They also have a very very friendly and lovely neighbor who is a dairy farmer. He was keeping a few cattle on the in-laws land for a bit to eat down their grass (cheaper than mowing it all), and sometimes comes over to ask for help if one of his cows is having trouble giving birth.
In the past three days, I have helped to separate the cows who are about to give birth, and also witnessed the birth of twin heifers.
Something I'm told is very rare.
The cow was having some trouble giving birth on her own, so we helped him heard her into a small paddock by herself, while he got a bucket of warm soapy water. To clean his hands while he reached his arm past his elbow into the cow to feel for the calf. He then announced why she was having so much trouble.
Twins.
So, with the help of more soapy water, some rope, and my mother-in-law, he got the two calves 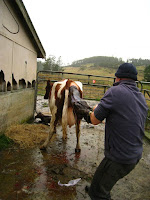 out within two hours. While I stood back in awe snapping photos. Then, to help the little things avoid toppling through barbed wire and into the creek while they learned to walk, my mother-in-law and I, along with the farmer, hefted the two little (they weigh a LOT heavier than they look) calves to a different, sheltered, part of the paddock.
All this on a day I'd decided to wear my best jeans (I've only got three pair at the moment, two of them rather dingy) and a nice sweater because we were supposed to go into the town to do some grocery shopping.
This was so much more fun. 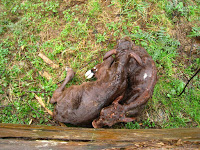 Venison isn't exactly a rare thing to eat in the U.S. I, however, have never cooked it before.

One of my brothers-in-law is an avid hunter (or, to be more accurate, he just likes to shoot stuff). And he is nearly obbsesed with deer. Telling him stories about walking so close to deer you can touch them back home makes him almost drool. As does the size of even our white-tail deer. 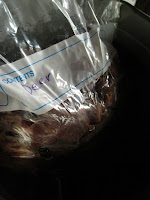 Long story short, he shot a deer some time ago and we ended up with some of the meat. Or, at least, my husband did and when I came home, found that he had about a pound and a half of chunks of deer meat in the freezer.

So I found out how to cook deer.

Apparently, it's a really tough meat, so you have to cook it a long time.

So, soup. My first attempt at making soup. Ever. Or cooking with venison. 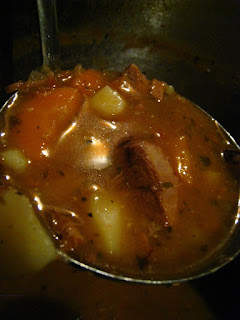 So into the soup went:
Seared chunks of deer (with olive oil, salt, pepper)
1 can of crushed tomatoes (to let the acid break down the meat a little?)
2 onions
3 carrots
2 cloves of garlic
1 Tablespoon of vegetable stock powder
4 cups of water
1 teaspoon red chilli flake
Oregano
Basil (I don't have a lot of spices in the house as of yet)
Rosemary
And later... after several hours of stewing....
4 potatoes
Salt
Pepper
Flour to thicken it a bit (added VERY gradually so as not to cook it and end up with flour lumps)

We then had my brother-in-law and his fiancée over for dinner. He said we shall have more deer, seeing as how I made something half-decent with it.

The meat was so nice and tender... falling apart by the time we ate it (I started the soup at 9AM, we ate at 6PM).
I thought it was a BIT too salty, but otherwise, soooo good. Just what was needed with the cold wet weather.
Posted by Firefly at 5:13 PM No comments:

A Change in Seasons

I've grown up within an hour and a half of Chicago, Illinois my whole life, 26 years.
I've now been married for a month and have been living in Tasmania, Australia, for a little over a week.
The differences between here and there are both huge and small. One of the bigger ones at this time being the total switch in climates. Back in Illinois, just as I'd left, we were in the middle of a massive heat wave. Temperatures in the 90's nearly consistently from morning to night, and just becoming more and more humid.
Nearly my ideal type of weather.
Hear on the other side of the world, though, it's nearing the end of winter. Or so I'm told. the last week of July we arrived was the coldest (or second coldest) July on record. It's remained steadily cold here.
Now cold is somewhat relative, I suppose. Because my body was used to 90-plus temperatures, everything under 80 feels cool to me. So the temperatures here, anywhere between 50-30 degrees farenheight, have felt cold.
But cold compared to a Chicago winter? No. It's not cold.
It's a bit odd sitting at my kitchen table looking outside over horse pasture (not ours) while waiting for the reverse-cycle air conditioner (aka "heat pump) struggle to heat up the little bit of house we don't have blocked off by heavy curtins and doors, and eating my version of hot apple crisp for breakfast with hot, hot coffee. In August. And having it feel very natural.
I, however, am still trying to stay warm and not complain too much about how chilly, gray, raniy, and dreary it is, while knowing back home it's still hot and sunny.
Posted by Firefly at 11:17 PM No comments: