I wasn't sure we would be celebrating Thanksgiving this year, my most favorite of holidays, because one of three situations was going to be true: A) I would be so hugely pregnant I would look and feel like I'd swallowed a planet, thus lacking energy to cook a massive meal. B) I would be in labour, since my due date was the 28th, and Thanksgiving was the 27th. C) I would be remarkably busy and tired with a newborn, thus lacking time and energy to cook a massive meal.

We didn't plan on not having any of these things happen, and our little boy dying a month before he was due to come instead, giving us the crappy consolation prize of more time and energy than we'd banked on. But we still weren't sure what to do about Thanksgiving, other than pumpkin pie because that is just an any-time-of-the-year food for us, though especially for Thanksgiving times.

As it turns out, our friends up the mountain were planning on cooking us a Thanksgiving dinner for the last few months since I'd talked with my friend and told her how much I love the holiday, but that we most likely wouldn't be doing the food part this year.

After Bennet died, our friends still wanted to make us dinner, and either drop it off at our house so we could have a little holiday alone, or, if we wanted to, still do it with them. This was all a complete surprise to me, and I cried. A lot. To know that someone cared that much who didn't share my little American traditions, who has 10 children of her own to care for, wanted to do this big thing for me and my family. I was more touched than I can say.

So my husband and I decided to have it with them. Because, while both of us love Thanksgiving food, the absolute best part of it for me has been being with family; that close, slow, crazy, cosy, warm feeling you get from sharing an epic meal together. And they may not be family by blood, but we are in "the family of God", and their actions toward us have shown a care that family and good good friends show.

So in spite of all my grief, I let go of my favorite holiday a little this year, and shared it.

And it was fun. And crazy. And homey. And really wonderful.

And it was hard. Because a little person who should have been with us wasn't. And as much fun as I had eating and talking and laughing, there were still moments of hurt. And I still had to fight off small bouts of anxiety and nervousness that are, quite honestly, new to me.

In the rather brief planning of this Thanksgiving, my friend asked me if there were any special Thanksgiving traditions we did. I have none. Other than my random list of things I am Thankful for (that I may have forgotten to do last year...) I really have none. So she asked her children to think of something they would like to do. They chose: come up with a rhyme or riddle and say it in front of everyone. Being Australian, and mostly under the age of 10, most weren't complicated or had anything to do with Thanksgiving, but ALL were fun. I really did love it! (Though I didn't participate. I'm rubbish at coming up with rhymes and riddles. I am not Bilbo Baggins.) 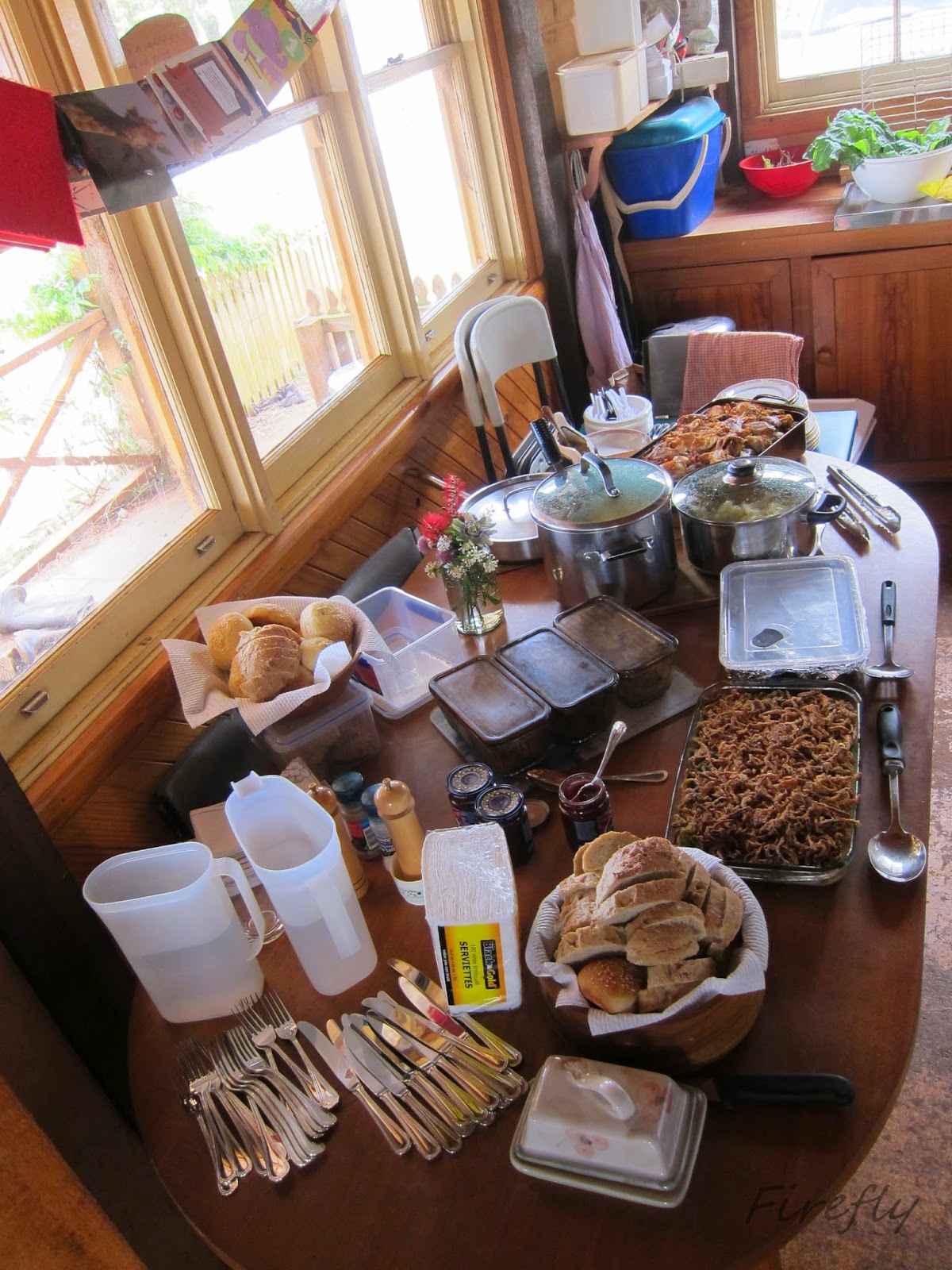 Now, as far as the food portion of Thanksgiving went, it was pretty fantastic as well. And I think we may have gone a bit overboard, but hey, leftovers are great. There was the turkey, the stuffing/dressing, mashed potatoes, sweet potatoes, cranberry sauce, rolls and bread, and, what I am most proud of this year, an entirely made-from-scratch green bean casserole. Because I can not find those crunchy onions that you put on top, but finally figured out, DUH, you can MAKE them because all they are are fried onions. And I made the cream of mushroom soup too. IT WAS GREAT. Nothing was mushy and gross by the end of it.

And of course, 4 pumpkin pies and LOTS of fresh whipped cream. And, for the first time doing Thanksgiving in Australia, I didn't have time to take pictures of all the food because, like Thanksgivings back home, there was plenty of noise, chatter, and wonderful distractions. I really did love it all.
Posted by Firefly at 8:29 PM 1 comment:

Today Phillip and I buried our second born, a son, Bennet.

He was born on October 21, stillborn. 4lbs 7ozs. With beautiful dark hair.

I haven't even reached my due date yet, November 28th.

I was only 33 weeks and a few days when he stopped moving normally and we went into the hospital one night, thinking, hoping, it was nothing.

But for reasons yet and maybe always unknown, our baby boy had had a massive brain hemorrhage, multiple and continuing we would find out later after being flown to Hobart for the emergency c-section that never happened because there was nothing that could be done for our little boy. Our Bennet.

Something about an ongoing development that caused it, something not seen on the 20 week scan. Something we could do nothing about. Something that would have taken his life sooner rather than later regardless of what we or the doctors did.

And I am completely and utterly heartbroken. And numb. And want to and need to write more, but I can't. Not just yet. Because I still can hardly say and believe the words "I have lost a son". Because my womb, my arms, are so very empty, and a grave that is so so tiny is full.