We do cloth diapers here in our household.

I try to be, what Phillip and I call, bilingual, speaking Australian and American, because sometimes people have no clue what I'm talking about, or it just takes too long to catch on to what words or phrases mean. Anyway...

We do cloth diapers.

I LOVE them. I mean love love love them. They are brilliant. And beautiful. And fantastic. I can't rave enough about them.

Most people assume, when you say you cloth diaper, that you do it for the environment (also that you want to use those old towel-diaper-nappies that are really just that: a small towel you fold and pin onto baby's bottom). Psh. I do it because it saves money. Most of our research showed that, for one baby, for one year, it costs between $500-800 to use disposables. One year, excluding wipes. We bought modern cloth diapers that will last us at least until Little Wubba is 3 for that much (baring replacing elastic, which is easy enough to do). So we're saving approximately that much until he's three, which means we can put it towards all the food he now eats and uses to fill those pretty diapers. Even with washing the diapers every two days, the price is still lower overall than buying disposables.

I mean, you can get decent ones even cheaper than that, but we learned from experience that it's worth it to splurge a bit and get really nice ones. Our first batch was dirt cheap, and some started leaking through the PUL (waterproof fabric) after 4 months.

Which meant I got to order new ones! We ended up splurging on the Cadillac of modern cloth diapers, some bumGenius's. And some Lotus Bumz and Sweat Peas we got on sale through various websites.

So, I love these cloth diapers. Why? They save money, but mostly because they are ab-so-LUTELY adorable. Even the plain colored ones are super cute. They're so cute and sturdy that, this summer, he's just been scooting around in his diaper, while still looking like I took the time to dress him. (Insta-outfit!) And, since we got ones that snap, they don't come off NEARLY as easy as disposable diapers do. He can pick at those snaps out of curiosity all he wants, they will not come undone unless I want them to.

Speaking of the snaps, poop. My mommy friends (and parents) have experienced what we like to call "poop-splosions". It's when a baby poops and it somehow avoids the diaper. And goes EVERYWHERE ELSE. Up the back, down the legs, around their arms, EVERYWHERE. Modern cloth diapers? Nope. Has not happened. The only time I (and my other cloth-diapering mommy friend) have had that happen was we used disposables. On the plane trip. In his bassinet. GROSS. Cloth leaks, true, when it's full. So yeah, poo leaks. A LEAK. Tiny little bits of leaks very occasionally. But those snaps are like little padlocks for the poo, and keep it completely in the diaper (unless the diaper was already very full of wee when poop happens).

The bad with cloth?

They're sometimes more likely to leak if you don't get to them in time, or if you've been washing them poorly. You get a disposable diaper and, to quote my friend, you can put a water balloon in those things and they will soak it all up. Cloth needs to be changed more often. And nighttime? You need either a special night diaper, more liners to stuff in them for more absorbency, or other things that can help that cost money.

Also, you have to clean them. It's gross. Especially once they start solids. Poop, even baby poop, is still poop. You get used to it, but it's still poop. You can't just chuck that stuff in the washing machine. I just try to remind myself it could be worse, and it's still saving money. And the adorableness and reusableness of the diapers makes it worth it.

But it's still yucky.

The thing I did end up switching to mostly because I noticed a difference in Simon's skin was disposable to reusable wipes. Only, our reusable wipes are just cheap baby wash cloths and not the kind you can buy for a lot of money. I figured we were washing diapers already anyway, why not wipes? I tried it (mixed up my own wipe solution of baby bath wash, sweet almond or olive oil, lavender and tea tree oil, and some chamomile tea in water) and really did notice a difference in Simon's "nappy area" not looking as irritated as when we use disposable wipes.

One of the more common things people would say to me during my trip went something along the lines of  "I bet you'll miss X, Y, and Z when you go back." Only one person said something that I thought was really intelligent and,  well, encouraging. I was asked what I was looking forward to getting back to.
So rather than list all the many many things I miss about what is still home in my mind, I thought I'd give a few of the things that, while I was away, I actually started to miss about life in Australia, what I've been happy to be back to for the past month.

Running my own home. Not that I didn't love having my mom and dad kind of... take care... of me and my family for our visit, there's just something that doesn't feel right as a woman when you aren't running your own home after a while. Breaks are nice, being taken care of is wonderful, but I really truly do love maintaining and caring for my home and family myself.

Fresh food. Ok, I LOVED not having to cook a meal for a month (though I did make rolls and cinnamon rolls and pie at different times during my visit), and my mom and aunt are wonderful cooks, (big sandwich anyone?) but there's something about fresh, local produce that really does taste... better. That, and coming into summer meant plenty more fresh fruit and veggies. Especially cherries! Oh how I looooove Tasmanian cherries!

Gardening. Not that I've been able to get to as much as I'd like, what with Simon being a baby who needs, you know, lots of care, and sensitive baby skin (the sun is intense), and there being a lot of things that are just too gross/harmful in our back yard for a bay to crawl on, but I have high hopes for our summer garden this year (again), and I'm happy to be able to do whatever work I can in it. I love being able to work and grow our own food. And the peas and beets we've gotten from it so far have been delicious.

A routine. Poor Simon (and Phillip and me) didn't sleep well at ALL during our trip. Massive time change, going back and forth between various houses and visits, staying up late. Nothing was ever really the same for long for the poor kid, and his sleep schedule reflected it. Getting back into a routine has meant that he, at most, wakes up twice during the night now, and is just the happiest baby during the day. Even with cutting four teeth at once! Routine and happy baby has also meant I've been able to get back into two things I love.

Painting and working out. I'm excited to jump back into my painting project(s). Not getting along as fast as I'd like, but delving into my paints again has been nice. Along with getting back into some sort of work-out routine. I wanted to start feeling overall healthy again, which was hard to do even before going on a month-long vacation. Getting back into yoga and some other cardio-type things has been wonderful. My body feels so much less achy, and I have so much more energy. And I just feel happier.

Are there other things and people I'm happy to be back to? Of course! But my "thankful" list can't go on forever publicly. They'll just be for me to mull over and feel all warm and fuzzy about. Doesn't mean I don't still experience crushing homesickness, I do. There are still moments when I will sit and cry over how much I miss my family and friends. But I've learned I can't dwell on what hurts, what is painful. Acknowledge it, yes, accept it, of course. But I realize, too, that there is just so very much to be thankful for, here, as well.

Email ThisBlogThis!Share to TwitterShare to FacebookShare to Pinterest
Labels: Back Home, Just Life

The flight from Tasmania to Chicago is something between 20 and 23 hours, depending on wind speed and all that. The long flight ranges from 13.5 to 16 hours. Add layovers in and you have upwards of 30 hours of travel time.

It's awful when you have to do it on your own, as an adult. Imagine taking a baby on it.

Honestly, on your own, after the first 5 hours or so on the long flight, your body just gives in to the discomfort, relaxes a bit, and it's not so bad until you get to the last 4 hours, when you want to climb out of your skin. You chill out, watch movies, read, maybe even manage some sleep. There is no relaxing and tuning out to a movie when you have a baby with you. Thankfully the plane had a bassinet we could use that pulled out of the wall, so Simon was able to lay down to sleep a little, and we could get a bit of a break from holding him. Still, the trip was hard. And that's a bit of an understatement. 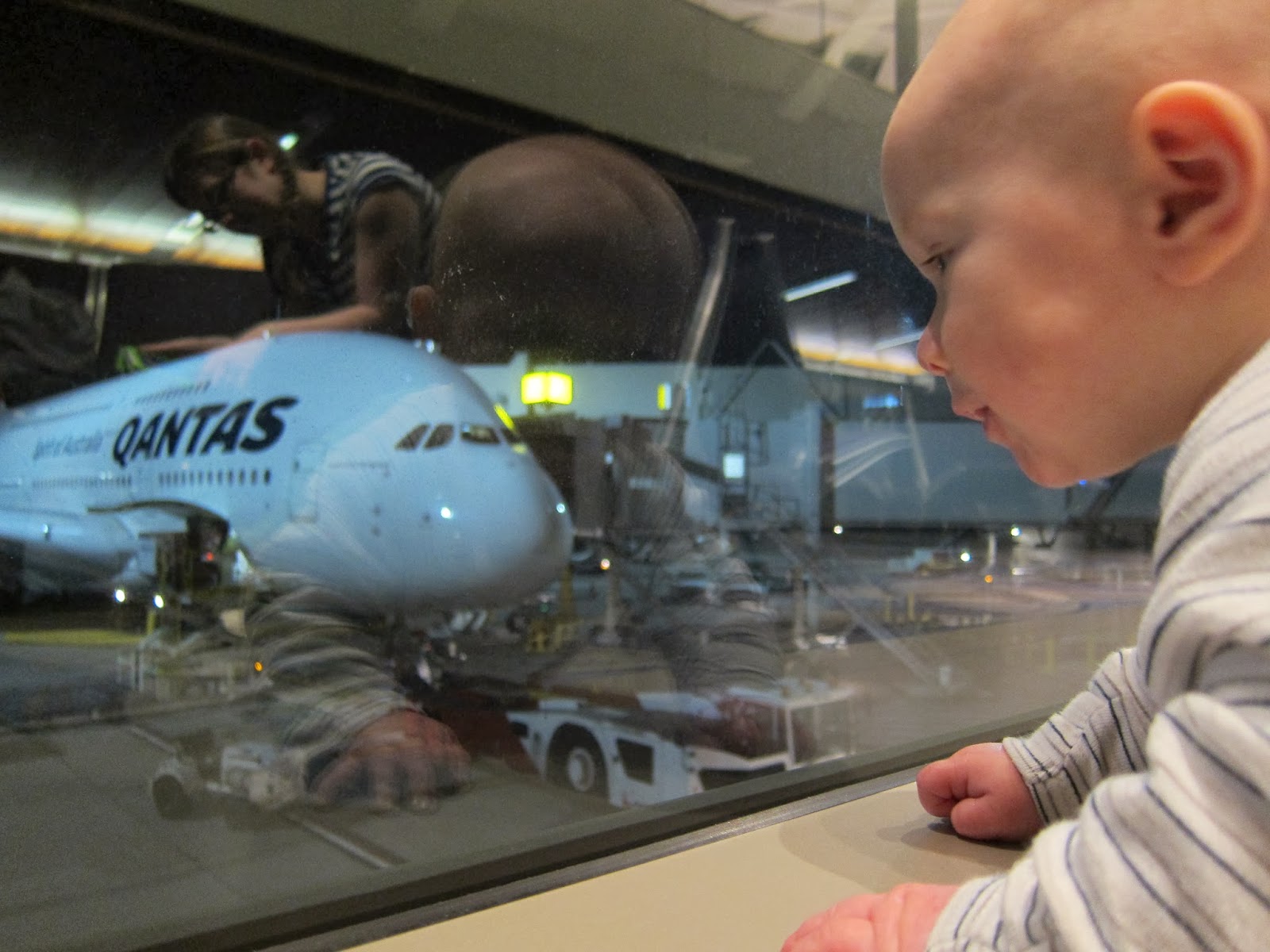 It was made somewhat nicer by Simon being remarkably well behaved and very interested in all the new people. And being complimented by fellow passengers on how cute and well behaved Simon was. Compliments on your child help make lots of situations better.

I've been asked if, after all that, the flight, the sleepless nights because of lack of routine for Simon
, the tired aching body from carrying a child all the time, the drop dead fatigue, would I recommend traveling with a baby, or would I do it again. My answer?

It was worth every bit of discomfort and pain to see my family and friends again. And I would do it again in a heartbeat.
Posted by Firefly at 3:33 AM No comments: