Last week, Phillip had a few days off work in which he borrowed a DVD from friends on how to humanely kill and dress chickens. And, after watching it and taking notes, he did it with our extra roosters.

Yes, this may sound a bit harsh to some. Why would we raise, care for, and then kill what is sometimes a bit like a pet? Well, that was part of the deal we made with ourselves when we decided to get chickens and a rooster.

There isn't much of a point in owning a rooster unless you want chicks (though ours does have a wonderful personality and roosters in general can make great "guard dogs"). And, when allowing your hens to hatch chicks, there isn't really any way to guarantee that they're only hatching females, and not males. And, when you have too many mature roosters in your flock, the hens start to go off laying eggs. Which is the MAIN reason we have our hens to begin with.

Anyway, when we got our chickens the "deal" was that, if we allowed hatchings, we would build up the flock with hens so we could have plenty of eggs for ourselves and to share with a few people, and extra roosters would be for meat.

The past year gave us two extra roosters that just entered their mature stage of life and needed either a new home, or to go in the freezer. 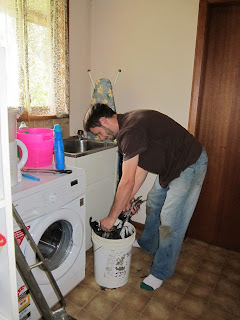 We found no homes for them, so, as said earlier, Phillip killed and dressed them. And, as someone who has only had experience with people either shooting or axing chickens up to this point, I was quite impressed with the gentle way that Phillip found to have them killed. It involves "hypnotizing" them by holding them upside down (this works great with fussy hens too, or just any chicken, and is kind of funny), and gently breaking their necks. This also leaves the meat in much better condition than shooting or axing them.

De-feathering was probably the easiest part of the job, since, being the first time we've had to kill chickens, and these being chickens we've helped raise and nurture, it was a bit hard emotionally (also, I'm flooded with pregnancy hormones at the moment and cried when Phillip brought the carcasses in the house). 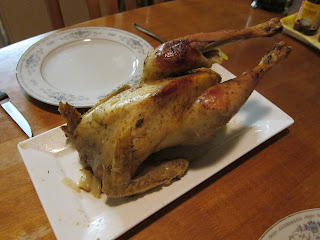 But Phillip did a wonderful job, and I roasted one the other night with some carrots from our garden, potatoes and onion. After only 2.5 hours in the oven, he was really really tender and delicious. Is there a difference in taste with a fairly fresh, free-range, you-know-what-it's-been-eating rooster and one from the store? Not really. Fresher maybe, and, well, it was a bit tastier than store-bought. But honestly not much different.
Posted by Firefly at 6:53 PM No comments:

We're Off To See The Tiddly Peeps

Chickens really are not the smartest of creatures.

This summer (the hottest on record here, though they've only been recording for the past 100 years), one of our chickens decided she wanted to be a mamma again. I guess she got jealous of the other hen who'd recently hatched a brood (you can see her baby photos here).

But, the hottest summer on record, our little yellow half-silky hen decided she wanted babies.

We did not. We had enough hens (5, though 2 were/are still too young to lay eggs just yet) and two extra roosters was more than we wanted (we'll be <gulp> killing and dressing them this weekend). So we tried to make her NOT broody (broody meaning, for those of you who don't talk about chickens, sitting on eggs and trying to hatch babies).

We took the eggs she managed to steal every day. This did not stop her, and she ended up, some days, just sitting on a nest of chicken turds. Gross. And dumb, as she wasn't even laying her own eggs, just stealing everyone elses.

Phillip, at one point, spun her around in a circle, to mimic one way we'd heard about to make chickens go off being broody. You put the hen in a bag, hang the bag on the clothes line, and spin it around, making them dizzy and they supposedly forget that they were broody. Phillip only spun her around in a circle while holding her (not in a bag), so he probably got more dizzy than she did. This did not work.

We tried shutting the chicken coop door during the day to keep her off her nest of turds, but she just found a place in the hay cock to sit instead. Also, we had to remember to go up in the early evening to open the door again so the chickens could go in to roost, so that when we went up to shut them in for the night, we didn't have to carry each chicken into the coop. Chickens, by the way, get remarkably dopey at night when they go to roost. It's kind of funny to see.

We tried dunking her belly and backside in water twice a day, which is supposed to make sitting on a nest really uncomfortable. I think this didn't work because it was so ridiculously hot, and the dip probably felt more revealing than uncomfortable to the stupid chicken. 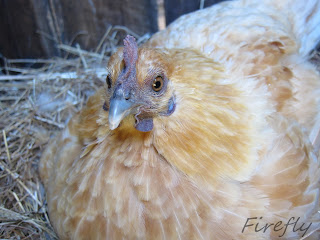 For two months, I debated with Philip about just putting eggs under her, since she wasn't giving up. No, we didn't need or want more chickens, but we had friends that did. And more roosters would just mean more chicken in the freezer at some point, and we could sell or give away hens to, well, anyone. And I had to go up to the coop twice a day to give this idiotic hen water and food so she didn't cook herself to death in the heat anyway. Might as well get something out of her sitting and my having to do more than sit in the ridiculous heat.

I ended up talking to our friends up the hill (the family of 11), and they gave us some eggs to put under our determined hen for them. And yes, she sat, like a good little mother, and hatched five of the eight eggs we were given.

We're calling this batch the Tiddly Peeps. Phillip assures me it comes from some song or another from some children's show (British, of course), but we can't find it. I still love to say Tiddly Peeps though (try it, it's fun).

At two months, we're pretty sure at least two of them are hens, which is good for the family we hatched them for. Hopefully a third is a hen. It's a bit hard to tell until the combs start developing more.

So... I finished my Pintrest challenge.

But in my defense  nesting kicked in SUPER hard this last month, and I wanted to get the house clean before I got too big (or too encumbered with a newborn) to clean.

I hate excuses though, so I did actually finish my chosen projects, even when I got somewhat fed up with them. Well, one of them. 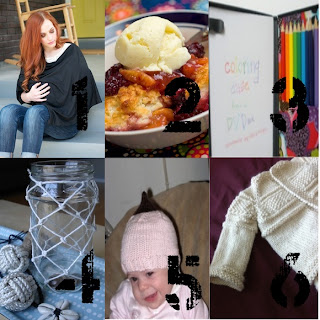 1. DIY Modern Nursing Shawl: I blogged about it here, if you so desire to read about it. Mostly the mix of my frustrations with reading/looking at tutorials and prego brain made this not as easy as it should have been. But I'm still super hapy with it, think it's adorable, and can't wait to use it as a nursing shawl instead of just a regular shawl 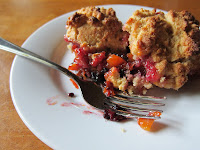 2. Blackberry Peach Cobler: I also blogged about it here. Oh my goodness, I wish we had more blackberries so I could make more. It's DELICIOUS. I at least froze a good three pounds of apricots (no, not peaches) to use later. Maybe with apples....
3. DVD Coloring Case: This. This is the pin that almost had me done, and ran me a bit late in completion of the 6 week time frame. I'll have a more in-depth explanation at the bottom of the post, as this is the first time I've been able to blog about it. 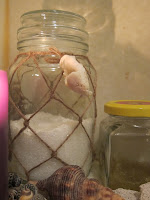 4. Fishing Net Decorated Jar: Cute and EASY. And I linked to the tutorial on this blog entry, if you want to check it out. 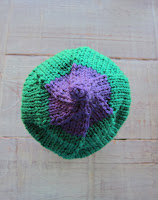 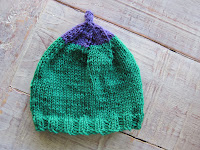 5. "Got Milk" Baby Hat: Phillip chose the colors for this one, so we have what I call "Alien Boob" hat. I still love it and think the hat is adorable and hilarious. I might have to make another one with different colors, just because I love a laugh.
6. Kanoko Baby Cardigan: I saved doing this 'til almost last, since I have never knitted a garment of any sort before. Oh. My. Goodness. It was SO easy! Once, you know, I figured out that I started out using the wrong sized needles, unraveled half a finished cardigan (so so tiny) and started over on larger needles. I love it! It's cute, and will be able to fit newborn (sleeves roll up SO easily) and a bit older. 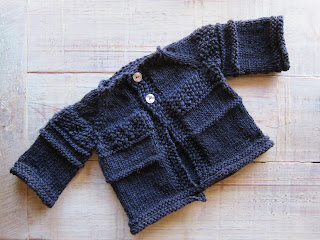 These DVD cases... oh my goodness. Maybe making one or two at a time would have been a better idea, but doing 6 (nearly done with a 7th, making it a velcro checker board. It's a project that contains a lot of variables. Too many, I'm thinking, when you're making this many. DVD cases aren't as big as you'd think, when you want them to contain a fabric pocket (that ends up bunching a bit in the corners, even when you're super careful about folding and gluing), even SMALL colored pencils, and a bit of paper. They close, but... not as well as I would have hoped. They should at least make fun little things for the kiddos to use once on the plane, or at least around home.
And I do kind of like the random DVD cases with handles we found at a garage sale. We bought a bag of random DVD cases for a dollar, otherwise, I would go with just sewing little bags with pads of paper or something for kids to carry around and draw. Cute idea, maybe works for some, but not as practical and awesome as I thought it would be.