So, one of the Blogs I follow, Merrick's Art, posted a Pintrest challenge.

If you don't know what Pintrest is, I don't know whether to pity or praise you, because it is both a time wasting trap and wonderful source of inspiration and ideas. On my part, I claim (to my husband) that it is not a time waster, as it has brought forth many a delicious new meal, and a few house-cleaning tips (orange oil vinegar?  Best grease cleaner I have ever come across, AND it doesn't matter if it gets on food or dishes).

Anywho, this Pintrest challenge is to pick six pins and, over the next six weeks (though I'm a bit late in the game posting this, so I think it's down to five?) work on and complete said pins. Then report back on progress.

Now, of COURSE I need more to do, what with being super pregnant and having plenty of sewing, knitting, and freezer meal preparing. So... I might be cheating a little and chose some pins that I've been wanting to try for a while now ANYWAY, and sort of lined up with my nesting and baby prep. And I promise that I had these picked out last week, my lazy bum just doesn't get to posting things for ages because, well, lazy. 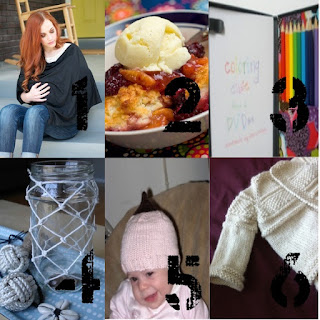 1. DIY Modern Nursing Shawl: I plan on breast feeding because, well, it's awesome. I don't feel like having friends, in-laws, or strangers see my breasts when the baby decides to thrash around and remove whatever cover I have. And things like Udder Covers and other nursing covers look like unattractive aprons and cost FAR more than I want to pay. This, is super cute looking.
2. Blackberry Peach Cobler: It's blackberry season again! And apricot season! (that's close enough to a peach, right?) Which means I pick plenty of one, and buy the other SUPER cheap, and need cooking ideas for them.
3. DVD Coloring Case: Friends of ours who have 9 children will be traveling to the mainland in May. Most of the kids are of an age that I think this might help on the long trip over, so I want to make at least a few for the older kiddos.
4. Fishing Net Decorated Jar: I have a few jars I want to spruce up cheap.
5. "Got Milk" Baby Hat: I've been wanting an excuse to make this for years. Even before Pintrest.
6. Kanoko Baby Cardigan: Baby is coming to Australian winter, and I want to try my hand at making something more than a hat.

Before we got married, I would talk to Phillip about my fears of living in Australia quite a lot. Mostly they centered around crazy dreams I kept having that involved swamp or prairie-type land with a very narrow path through it. The rest of the land would be SWARMING with snakes.

I don't really dislike snakes. They used to be one of my absolutely favorite animals. I loved them. I still find them absolutely fascinating. It's just that here, they have the possibility of killing you. Spiders... not so much. I hate them. Ok, maybe hate is too strong a word, because, again, there are some breeds I really don't mind, and still find fairly interesting. And, as a kid, I was the weirdo who would play with Daddy Long Legs and freak out other girls (the benefits of having a dad who loved nature and taught me a lot about natural...stuff).

I knew snakes weren't really going to be a problem. They generally stay away from you. Except, you know, last year, when I or people I knew kept stumbling on them (remember my brother-in-law's adventure?).

Spiders, though? I wanted those not in the house. Especially the very venomous ones. And huntsman. Ew. Ewewew. They're big, nasty, and hide everywhere. They are, of course, not as bad as say, a Red Back, a small spider that can make you pretty sick if you get bitten by it. Huntsman are actually good to have around because they eat those nasty spiders. But they are big. And hairy. And squash themselves flat enough to hide behind picture frames and clocks. And squeeze through cracks in poorly set screens.

I told Phillip when he was choosing a house, that I didn't care so much where we lived, as long as we didn't have a spider problem. Moving here, I made sure I developed habits that keep the nasty spiders away. Things like, not letting piles of clothes or blankets accumulate on floors or chairs, keeping most cob webs at bay, and letting some of the nicer spiders (here it's Daddy Long Legs) live because they will eat the nasty spiders. We also sprayed Baygon (a nicely potent pesticide)  around windows and doors every 6 months. Until I got pregnant and I couldn't do it.

And last year? No problems. The only time we had nasty spiders in the house was when we brought home a box that had been stored in my in-law's shed for several years. Apparently, it had been the home of a Huntsman and a House Spider.

This year has been another story.

I have found Huntsmen every few weeks.

Mostly in our bedroom.

And I risked my gag reflex to take photos of a few of them for you, dear readers. Phillip recently informed me that he's taken care of at least a few I didn't know about. And sometimes I was too busy gagging and acting like a scared child to grab my camera.

There are a few others I just didn't get photos of. Like, on Valentines Day, I found a White Tip on the front of a cupboard. Kind of a terrible ending to my day, since, being all hormonal and hating spiders, I flipped out and made Phillip kill it with fire (ok, maybe not with fire, but I made him kill it really well). It was kind of a bad ending to our "I made you lots of really delicious steak and veggies and sour cream apple pie" celebration.

Most of the Huntsmen that we find in the house, I try to get Phillip to just release back outside, since really, they ARE very helpful spiders. I just... I just really don't want to find anymore in the shower with me, or behind my pillow, or sitting on a light switch or anything.
Posted by Firefly at 4:11 PM No comments: