Phillip described it to me as a race over several days that goes all through the state of Tasmania over "the worst roads." One of these roads happens to be right where his parents live.

The part they live on isn't particularly terrible, but they do live at the bottom of a rather steep hill that comes right after (or before, depending on which way you're driving) a steep turn AND a blind turn. They also live right next to "The Gog" which is the road (and also a working forest) we take to go get the most fantastic ice cream ever. It's narrow, curvy, and one side goes up a mountain, the other down it. None of those sissy guard rails or shoulders or lines marking the middle that you'd find on American roads. No, these you either drive at breakneck speeds and chance killing yourself and others, or drive carefully and hope everyone else is mostly sticking to their side of the road and driving as carefully as you. Oh, and that you don't come upon any bikers suddenly.

Anyway, even driving slowly, these are windy crazy curvy blind roads with tons of potential to spin off or crash into a bank or get violent motion sickness.

So even though I'm not a car person, the thought of people who know what they're doing racing along these roads sounded pretty exciting. Plus, there's just something about fast cars on not a NASCAR track that is attractive.

We got up early and drove to Phillip's parents house, offering to make breakfast. (We were supposed to be locked in from 9AM to about 4PM when the race should be over.) Phillip cooked the whole-wheat pancakes I'd mixed, and I made some pretty fantastic little apple fritters (first attempt, so I was happy trying something new and delicious), ate, and then waited for the race to start. 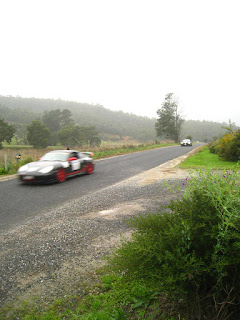 Lots of cars started going by, so Phillip and I went and stood in the light rain getting poor photos and hoping for spin-outs, crashes, and mostly cars overtaking each other on the corner. We thought what we were watching were the touring cars (cars that are done up, fast, pretty, expensive, but their owners don't want to actually race them for fear of them getting damaged, so they just parade them around). They really weren't driving any faster than what we would do on those roads. 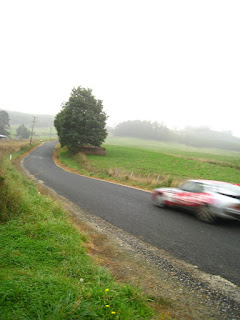 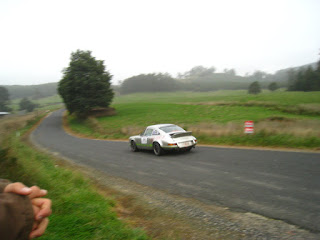 So as my camera battery started to die, we decided, after half an hour, to take a break and warm up inside and let my battery charge. All thinking that the REAL cars would be coming through much later, as had been the norm for years.

Ten minutes after we got in the house, no more cars. Well, no more RACE cars. The police car went through with lights and sirens indicating the end of the race, and then... regular-type people.


So.... it was kind of disappointing. It was all over (for our section, anyway) in about 2 hours (or less, I wasn't really timing it). But at least we got a delicious family breakfast, and then (Bornstein Targa tradition) pumpkin soup for lunch.

I later learned there was a bike race that same weekend (learned by driving through it in Sheffield on Sunday). Honestly, I almost wish we'd gotten to watch that instead. More hard-core participants.

Posted by Firefly at 7:41 AM No comments:

Last weekend, Phillip and I, because of canceled plans and injured shoulders, ended up driving out to do the short hike to Liffey Falls to try and, well, see the falls.

This would be our second attempt. The first was during my visit here last January. We ended up taking the wrong trail and walking for hours on what looked like nothing more than some goat path. We saw some little waterfalls, and it was an undeniably beautiful walk. However, my knee problem flared up because of the roughness of the trail, and we went in prepared for an hour long easy walk, not a 5 hour long hike over fallen trees, rocks, and some, at times, rather slippery and steep terrain.

We were also distracted by a sign pointing to a "Big Tree" path, that led to, well, a big tree. A REALLY big tree.

Anyway, this time, we knew which path we were supposed to go on. So after a 30+ minute drive, we arrived at the park, started walking, and, of course, the main viewing platform was closed because it's being reconstructed.

Oh well. The walk was still pretty. Especially if you like scenes from Jurassic Park. Or pretending you're in Lord of the Rings.... 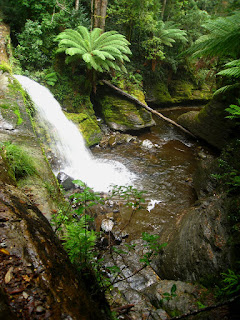 Posted by Firefly at 7:10 AM No comments: